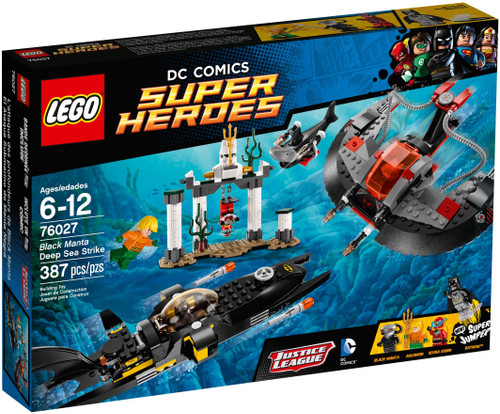 Black Manta has captured Scuba Robin, snatched the trident from Aquaman and escaped in his sleek Sea Saucer! Now, the evil villain is holding Scuba Robin hostage at the temple ruins at the bottom of the sea. So team up with Aquaman and Batman™ to launch an underwater rescue mission in the awesome Bat sub. Steer clear of the Sea Saucer’s stud shooters and the roboshark’s laser shots. Retaliate with the Bat sub’s flick missiles and unleash super-jumping Aquaman to bounce Black Manta off his perch. Free Robin from his chains and escape with him on the detachable glider! Includes 4 minifigures with assorted weapons and accessories: Batman™, Aquaman, Black Manta and Scuba Robin.