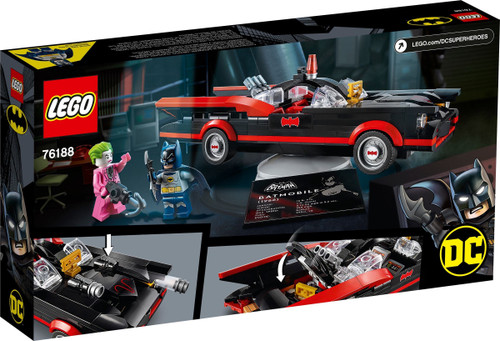 LEGO® DC Batman™: Batman Classic TV Series Batmobile™ (76188) gives kids all the style, action and excitement of the original 1966 Batman TV series. The iconic vehicle is packed with cool features and attaches to a rotatable stand.

Classic Batman vehicle and minifigures
Kids can play out endless Batman adventures with this impressive Batmobile, plus Batman and The Joker™ minifigures from the original TV series. This amazing vehicle includes an opening trunk containing a Batarang™ and additional bricks that kids can use to customize the car’s hood so it appears with or without the stud shooters. When the action’s over, the Batmobile can be displayed on a rotatable stand that lets kids display their awesome, crime-fighting machine at its best.